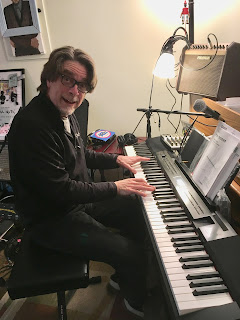 Grand Prize winner, John Latini, was a semifinalist in the categories of Americana, Christian, Pop and Singer Songwriter. His grand prize winning song, "Pull Me Up”, won in two categories. A three time Detroit Blues Champion, John Latini is riding the wave from his last release and 5th Cd, his first full length blues recording “The Blues Just Makes Me Feel Good”. Within 10 days of its release to radio, it garnered 41 shining reviews including one in No Depression, “Vocalist/guitarist/ songwriter John Latini's first full length release is a shack-shakin', window bustin' blues party.” The album remained on the top 50 Blues Album Chart for 7 months in 2017, and took the #23 spot for the Top 200 Contemporary Blues Album releases of 2017. John took some time out in his busy world to answer a few questions about his songwriting success.

1. How and when did you become a songwriter?
I began writing my first songs in High School.

2. Are there any songwriters that influenced your writing?  Do you do any co-writing?
Both of my older brothers are wonderful songwriters. My oldest, Mike, began using me as his "litmus paper" when I was about 8 years old.  He would test his latest songs out on me and I would memorize the words right there on the spot.  Later on, when I was able to play a little bit, I would “figure out the chords of his songs to the best of my memory” … in some cases I wasn’t even close, but I had those words!  My brother Joe’s songs were always more complicated and therefore, safe from my “re-writes”.  To this day, they both write some of the best songs I’ve ever heard!

The songs of those artists filled my head and the manner in which they wrote - wherein not everything about the story is revealed upon the first listen - filled my imagination!
I have had occasion to write with a few other individuals and I have found it both gratifying and frustrating … I think it can take some time to develop a synergy or “mutual process”.

3. What is your writing process, i.e. do you start with words, melody or something else?
My writing process varies, but it usually begins with a lyrical or musical “nugget” that I believe has promise - whether or not it’s a phrase or simply a collection of syllables - if I like the initial idea, “play on words’, riff or whatever, I will let it stew in my conscious and subconscious mind for a bit, revisiting it a lot in it’s inception.  This is generally a natural course of the idea exciting me to the extent that I replay it in my mind over and over.  If that excitement ebbs naturally before I have anything resembling a song, then the idea stands a smaller and smaller chance of seeing daylight over time.  If, however, the “delta is fertile” and I begin to see progress in the form of a direction, story, verse, chorus or otherwise, I pursue it, but again, only to the extent that it is pulling me forward … in this way, many of my songs are written fairly quickly, … while many other potential songs remain on the cutting room floor never to be thought of again (which can be viewed as confirmation that the initial idea or fragment was never strong enough) … unless they revive themselves in my memory somehow (which can then be viewed as validation - “I knew this was a great idea when I originally had it!).

4. How did your DSA song contest winner “Pull Me Up“ come about? ( See Grand Prize Judge Roy Elkin's comments  on this song at https://dsasongcontest.blogspot.com/p/2018-song-contest-judge-roy-elkins.html )
Now my contest winner is a good example of my “process" in action.
Pull Me Up is a song about hardship (in this case flooding) threatening your livelihood and/or lifestyle and indeed, threatening your own loyalty to your “ancestral” livelihood and/or lifestyle (in this case farming) and confronting the type of person you are in the face of those circumstances.
The idea came to me from my observations of the annual flooding of the Mississippi River in SW Illinois, and the reflections on what effect that flooding would have each year on these farmers.
I got the first verse fairly quickly and although it took me a long time to actually finish the song, the strength of the first verse was enough to keep me excited over a longer period of time (another factor that contributed to this idea resurfacing time and again until its completion, is that I visit this area once or twice a year … naturally the ideas would swirl around with every visit).
Water’s in my cornfield and lightning took my barn
Telephone pole’s in three foot of water and the service is long gone
River Street is what it claims, flowing deep and brown
But there’s one small piece of good news, ain’t no-one in this town that’s not too tall to drown
So that's the initial verse that kept me going … I think it’s strong from the standpoint of it’s imagery - you can “see” what happened in the “images”.  The story is being “shown” to you here, rather than “told” to you.  I also like the use of all of the “negatives” in the last line.  This illustrates the idea of  “peeling away the layers of the onion” - not everyone is going to catch that on their initial listen.

5. What advice do you give to people who want to be songwriters or improve their songwriting?
I advise folks to write because they love it.  Try to put some real substance in there.  Think in terms of a great book you’ve read, or a great movie you’ve seen … you enjoy intrigue, suspense, romance - all of that, yes, but the author of the book or the director of the movie is trying to make you “feel” it, not just “read" it, not just “watch” it.
Don’t settle for the first idea/rhyme/solution … explore! … there’s more!
It’s difficult to “fit a full blown Western” inside 3 verses and a chorus, but it’s been done magnificently!  It can be challenging, but that’s the key - challenge yourself!

First Runner Up
Our first runner up grand prize winner, Louie Cate also won 1st place in the love song category with the song, “All The Lovin’ I Need”.  Also in 2018, he won grand prize in the John Lennon Contest world category with “Break Your Fall” and in 2017 he won
1st in the adult contemporary in Mid-Atlantic Song Contest with “Moon Safari”.
For years, Louie Cate has entered and placed in our song contest as category winner and grand prize runner up. He is an excellent songwriter who has won about 100 first places in song contests including grand in billboard, mid-atlantic, chris austin, southern songwriters guild. His influences are motown, stones, beatles, doors and dylan right out of the box. Some of his demo singers have gone on to have great careers, including, joe diffie, garth brooks, trisha lathan (now it's yearwood) martina mcbride, billy dean, rob crosby, sylvia, clay davidson, ty herndon. He thinks a lot of the best singers that he used never got deals never got record deals.   https://www.broadjam.com/louiecate

Second Runner Up
Scott Thorn, our 2nd grand prize runner up with his song, “Broken Horses”, is an award-winning singer/songwriter who grew up around the Gulf Coast and central panhandle of Florida listening to folk, blues, country, gospel and rock and roll. Since that time he has travelled and lived in many places throughout the United States from one coast to the other and abroad taking influence from his travels. His direct and introspective songwriting style forms the medium to tell his lyrical stories of love, joy, loss, and standing up for what’s right. His music bears the marks of his travels and while best described as Americana fuses several influences from rock, folk, and country. Currently residing in southern California, Scott is a 2016 Alumni of the Acoustic Guitar Project and a member of NSAI, West Coast Songwriters, the Songwriter’s Association of Washington and now the Dallas Songwriters Association.
Scott’s debut album titled Ordinary Day was released in July 2016. From that album, the song, “Watch Out Wichita”, was picked as one of the top 5 Americana songs for 2016 by the Big Fat Wide Americana Radio Show and his title track “Ordinary Day” has had thousands of plays on indie radio stations across the globe. Scott’s second album, “Broken Horses”, was just released.  https://www.reverbnation.com/rpk/5419043